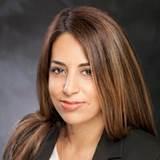 Arezo Yazd is a Senior Counsel with the Commercial Law Development Program (CLDP) in the Office of the General Counsel of the U.S. Department of Commerce. Ms. Yazd overseas work on legal reform and economic development issues with countries in Southern and Eastern Europe, the Caucasus, and the Gulf.

Prior to joining CLDP, Ms. Yazd was in private practice with a focus on International Real Estate and Structured Finance in New York City at Paul Hastings LLP and Weil Gotshal LLP, respectively.  Ms. Yazd was also a Fellow at Human Rights Watch from 2009-2010.  In 2008, Ms. Yazd clerked in the United States Senate Judiciary Committee, Subcommittee for the Constitution. Ms. Yazd has published on several news outlets, including CNN, Al Jazeera America, The Huffington Post, and the International Journal for Court Administration on international law and foreign policy issues.

Ms. Yazd earned her Juris Doctorate at the University of California-Berkeley (Boalt Hall), where she co-founded the Berkeley Journal of Middle Eastern and Islamic Law. She was also the Executive Editor for the Berkeley Journal of International Law. She earned her Bachelor degree in Middle East Studies and Political Science from the University of California-Berkeley, graduating with High Honors. Ms. Yazd speaks Persian and is admitted to practice law in the State of New York.