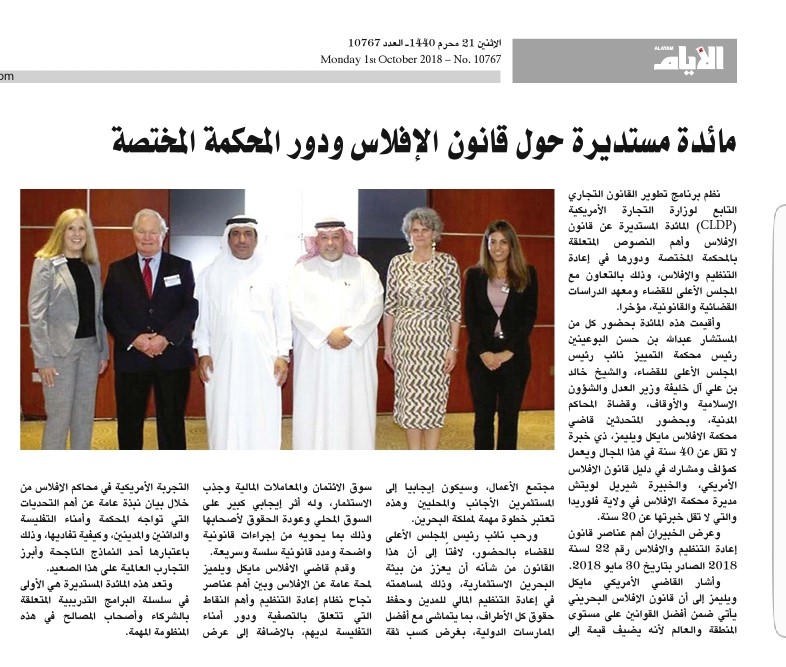 From September 26-27, in Manama, CLDP, in coordination with the Supreme Judicial Council of Bahrain, conducted a judicial training on the development of a bankruptcy system in Bahrain for 16 local judges. Bahrain recently adopted a new bankruptcy law in accordance with international best practices, which allows for restructuring proceedings. CLDP experts included the Hon. Michael Williamson, chief judge of the U.S. Bankruptcy Court of the Middle District of Florida, who focused on reorganization case studies, while also sharing practical experience on bankruptcy case management in the U.S. system. Participants learned about the process by which bankruptcy cases are adjudicated in the U.S. Topics included how a transparent and predictable bankruptcy system can help attract foreign investment, the role of court automation and case management technology in ensuring efficient and transparent adjudication of disputes, and valuation methods and the enforcement of cross border bankruptcy judgments, which is becoming increasingly important with the global nature of commercial lending. CLDP will be actively promoting the new bankruptcy law in Bahrain to help train a new cadre of bankruptcy trustees as well as to train the judges that will preside over insolvency proceedings, alongside the government stakeholders that will regulate the bankruptcy system.