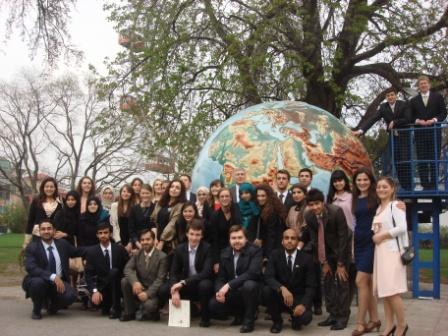 After their successful participation in the Second Annual Willem C. Vis Middle East International Commercial Arbitration Pre-Moot, which took place February 27-March 1, 2012 in Oman, teams from Bahrain, Oman, UAE, Qatar, Tunisia, and Jordan traveled to Vienna, Austria in March to compete in the Vis Moot. The annual Vis International Commercial Arbitration Moot, held in Vienna, Austria, is the pre-eminent moot on commercial law and arbitration. Teams from over 285 universities and 71 countries took part in the written and oral advocacy competition.

The Middle East teams participated in practice arbitration rounds organized by CILE alongside teams from Serbia, Kosovo, Ukraine and the University of Pittsburgh. The teams then went on to compete with teams from around the world in the general rounds of the Vis Moot.

The Vis Middle East Moot program is organized by CLDP, the University of Pittsburgh School of Law’s Center for International Legal Education (CILE), and the Bahrain Chamber for Dispute Resolution (BCDR-AAA). Since 2006, CLDP and CILE have introduced the Vis Moot in Bahrain, Oman, UAE, Qatar, Jordan and Iraq. With the assistance of BCDR-AAA, CLDP and CILE started the Vis Middle East Pre-Moot in 2011 in order for Middle East Vis Moot teams to gain valuable skills in oral advocacy and practice their arguments prior to the competition in Vienna.