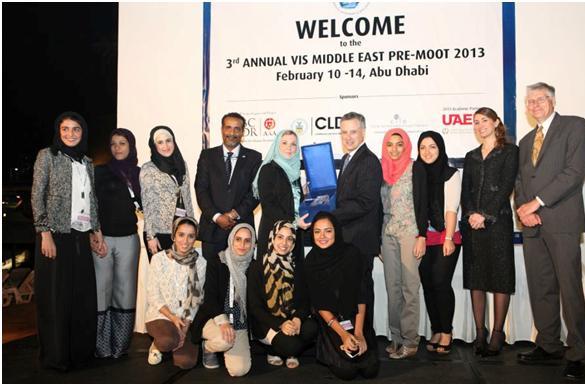 The Third Annual Middle East Pre-Moot International Commercial Arbitration Pre-Moot in Abu Dhabi, United Arab Emirates, took place February 13-14, 2013. The Vis Middle East Pre-Moot was organized by the Bahrain Chamber for Dispute Resolution (BCDR-AAA) with support from CLDP and the University of Pittsburgh School of Law’s Center for International Legal Education (CILE). This competition brought together students, professors and deans from the University of Bahrain, the University of Baghdad, Sultan Qaboos University in Oman, United Arab Emirates University, Faculty of Legal Political and Social Sciences of Tunis, University of Jordan, and Dar Al Hekma Law College from Saudi Arabia. Legal practitioners from the local, regional and international legal community took place as arbitrators and provided the students with important feedback to help them to continue to improve their arguments for the final competition which will take place in Vienna, Austria on March 23-28, 2013.

Since 2006, CLDP and CILE have introduced the Vis Moot in Bahrain, Oman, UAE, Qatar, Jordan and Iraq. With the assistance of BCDR-AAA, CLDP and CILE started the Vis Middle East Pre-Moot in 2011 in order for Middle East Vis Moot teams to gain valuable skills in oral advocacy and practice their arguments prior to the competition in Vienna. The annual Vis International Commercial Arbitration Moot, held in Vienna, Austria, is the pre-eminent moot on commercial law and arbitration. Teams from over 285 universities and 71 countries take part in the written and oral advocacy competition.

This year, a high caliber group of students spent five days working, learning and competing in the Middle East Pre-Moot. The teams illustrated a strong command of English legal language, impressive oral advocacy styles and sophisticated understandings of the moot problem. It is clear from the students’ preparation and level of competition that the event is gaining recognition among Middle Eastern law schools and continuing to grow as an established moot court experience.

The Middle East Pre-Moot, which included three days of oral advocacy training and preparation before the competition, has widely impacted the development of commercial law and arbitration curricula in Middle East law schools and has served as a training ground for the next generation of lawyers. It has also served to strengthen ties between Middle Eastern law students and local practitioners who often help to train students for the Middle East Pre-Moot and the final competition thus aiding in creating a cooperative and self-sustaining environment for the development of commercial arbitration in the region.