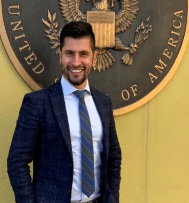 Before joining CLDP, Mr. Khan was an associate at DLA Piper where he practiced complex commercial litigation, national security and battlefield incident litigation, white collar and regulatory defense, and government contracts litigation, with a specific focus on representing and advising companies in conflict and post-conflict areas. Prior to that, Mr. Khan was a litigator at Cooley Godward Kronish where he represented clients in cases involving contract disputes, commercial transactions, real estate disputes, and regulatory issues for businesses.

Mr. Khan received his Juris Doctorate and LL.M. in International and Comparative Law from Cornell University Law School where he served as an Editor of the Cornell Journal of Law and Public Policy.