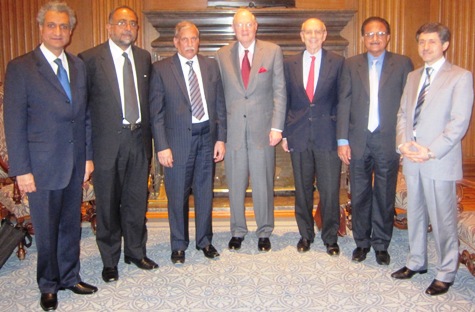 In close collaboration with the Pakistan Supreme Court through its Federal Judicial Academy (FJA), CLDP organized a three-week (October 25-November 12) judicial capacity building program focusing on the topics of judicial enforcement of intellectual property rights and foreign arbitral awards. The main objective of the program, which included exchanges with the delegations U.S. judicial counterparts, was to build the capacity of Pakistan's judiciary in enforcing intellectual property rights and foreign arbitral awards as the Pakistan Supreme Court advised that CLDP had sensitized it to the importance of those two domains. Four high court justices representing each province, led by Supreme Court Justice Mian Shakirullah Jan, met with members of the U.S. judiciary (federal and state), the World Bank, technology incubators, leading economics-based think tanks, and government agencies to discuss the role that the Pakistan judiciary can play in Pakistan's economic development through judicial enforcement of IPR and foreign arbitral awards. The program included segments at the United States Patent and Trademark Office and a study tour in Sacramento, California where the delegation had exchanges on best practices in adjudication of IPR cases.  The delegation wrapped up the program with a two-day intensive dialogue with the Honorable Delissa A Ridgway, Court of International Trade, on procedural and substantive aspects of adjudicating matters involving foreign arbitral agreements and awards. One of the program participants cited the delegation's meeting with United States Supreme Court Justices Kennedy and Breyer as a highlight to the program as Justice Kennedy referred to the delegation as judicial heroes in praising the Pakistani judiciary for its courageous efforts to promote rule of law in Pakistan. The Pakistani justices also commended CLDP for its role in organizing the exchanges and requested that such programs be expanded to cover all branches of the judiciary. CLDP will continue to work with the Pakistan Supreme Court and FJA to design and implement sustainable technical assistance for Pakistan's judiciary.