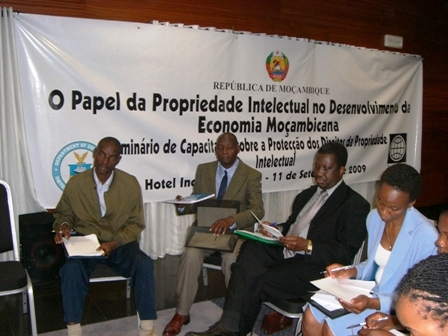 CLDP, together with DOC's International Trade Administration and the World Bank, organized a three-day workshop in Maputo, Mozambique, September 9-11, 2009, entitled The Role of IP in Growing Mozambique's Economy and attended by nearly 100 participants including Mozambican judges, prosecutors, the Mozambican IP Office (IPI), Customs, and other key stakeholders. Such a diverse program was the first of its kind in Mozambique, and helped to bring the country further along in discussions about how to address counterfeiting and piracy issues with neighboring countries in Southern Africa. Utilizing a U.S. federal judge with experience adjudicating IP disputes as well as experts from USPTO, USDOJ, the World Intellectual Property Organization (WIPO) and the private sector, the workshop explored the importance of intellectual property protection and its impact on Mozambique's economy, as well as the main issues arising in the adjudication of IP disputes through panel discussions and interactive case studies. At the conclusion of the workshop, the participants adopted a series of key recommendations for action by the Government of Mozambique in the areas of inter-ministerial cooperation, IP legislation, capacity building, public outreach and public-private sector partnership.